Beche de mer is an elegant name for an ugly little creature that is soft, squirty and totally devoid of any personality. Yet, an entire retail industry has been growing around it. Pauline D Loh looks at the sea cucumber or haishen.

Once, scuba diving in the marine park at Koh Samui in Thailand, we floated above a quiet cove with a multitude of what looked like long, black sausages littering the sea floor. They hardly moved, and imperceptibly swayed as the tide gently rocked them. While the expatriate divers shrank fearfully from this strange sight, the Chinese and Thai among us recognized them for what they were immediately ?sea cucumbers, a treasured marine delicacy that appeared only on the best banquet tables.

Thankfully, it was a protected national park, and the creatures were left peacefully to their sedentary lives and spared the cooking pot while we curbed our voracious instincts and paddled away.

Back in China, you may have noticed a proliferation of specialty shops which have cropped up all selling sea cucumbers from Dalian, the bustling sea port of Liaoning province. This is where the best cucumbers reputedly come from. In the northern waters nestled between Shandong and Liaoning provinces, spiked or horned sea cucumbers are farmed and harvested to feed mainly Chinese gourmets, since the rest of the world seems a tad more reluctant to come to terms with this odd little delicacy from the sea floor.

While the varieties found in the warmer waters south are smoother, these cold-water varieties have fearsome spikes growing from their bodies. But it's all show. That's because the sea cucumber's body is boneless, and mainly composed of a collagen-rich wall that has a great capacity to shrink and stretch.

It is this gelatinous characteristic that makes the sea cucumber such a favorite food. The Chinese, veteran gourmets for thousands of years, knew the sea cucumber was food for the skin long before Western scientist proved that fact in recent decades.

According to traditional Chinese medicine, it has a host of preventive and curative properties - ranging from the usual male-energizing properties vis--vis its phallic ability to harden and squirt when under threat to more rational reasons like it being an excellent source of collagen, soluble protein, iodine and other trace minerals.

Chinese TCM practitioners often recommend the sea cucumber for patients with hypertension, believing that it will lower pressure and improve hardening arteries. I am unsure if this is again more a case of form rather than substance in the likes of the phallic fantasies but TCM had always been ahead of conventional wisdom, so I dare not argue the case.

Still, it is a very pleasant ingredient to use, if you have the knowledge and the patience. The sea cucumber, like its cousin the jellyfish, is appreciated for its tactile properties more than its taste, which is almost non-existent. The jellyfish is appreciated for its rubbery but crunchy texture, and the sea cucumber is prized for its ability to soak up flavor like sponge, and of course, its rich gelatinous feel.

Dried sea cucumbers must be soaked very thoroughly for it to fully hydrate. That's the reason why beche de mer on the market often comes already hydrated and ready to use.

To get rid of any residual fishiness that may linger, blanche the sea cucumbers in plenty of ginger and scallion-infused boiling water.

Mostly, it is braised or stir-fried with other ingredients that will sweeten the dish, like meat or seafood, mostly prawns.

In the coastal Fujian and Shantou area, there is a very popular sea cucumber dish that has become a part of the culinary heritage. This is the braised duck with sea cucumber, an odd combination at first sight, but a masterly marriage when you taste it.

In Beijing, where Lu or Shandong cuisine is well-known, sea cucumbers are braised with ribs, red-cooked in a roasted scallion and ginger sauce or stuffed with a pork and prawn filling and then served with a crystal glaze.

It has become a lot easier to cook sea cucumbers now, with the convenience of vacuum packed ready-hydrated slugs readily available. Their price range can vary from the exorbitantly high for the black, spiky slugs to the cheaper, everyday sea cucumbers that are larger but with a smoother skin.

I have no particular preferences since I believe that the texture of the sea cucumber depends on the expertise of the chef, and the flavor on the quality of ingredients you are using. They are all equally rich in collagen.

Even if you are a novice at sea slug cooking, you must try these recipes. Like so many dishes in Chinese cuisine, they are all studied, carefully put together and faithful to the trinity of good color, aroma and taste.

1. Wash sea cucumbers. Slit down one side lengthwise, open up and scrape the insides with a sharp knife. Rinse and dry.

2. Shell the prawns and smash each with the flat of a cleaver. Mince and add to fatty pork. Add cornstarch, salt, sugar and sesame. Use your finger to crunch the mixture and mix the prawn well into the pork.

3. Sprinkle the mixture with a little water and mix vigorously in one direction until the mixture becomes gummy.

4. Dust the inside of each sea cucumber with cornstarch and stuff with the pork and prawn mixture.

5. Place the stuffed sea cucumbers in a container and steam for 15 minutes over high heat.

6. While this is cooking, prepare the garlic chips and crystal glaze.

7. Thinly slice the garlic and fry in a little oil over medium heat until the garlic chips are golden. Remove from fire and drain the pan.

9. Start the pan again over medium fire and pour in the cornstarch slurry. Cook over medium heat until mixture turns clear. Pour immediately over the steamed stuffed sea cucumbers and garnish with garlic chips.

This is very much in the southern Chinese style of cooking where original flavors are emphasized, with very light seasoning. The secret to getting the sauce crystal clear is the control of the heat. Do not ever let the glaze come to a boil and you will get a lovely, crystal glaze that will make your dish glisten. The garlic chips add aroma, crunch and just a bit of a bite.

Ingredients (for a family feast): 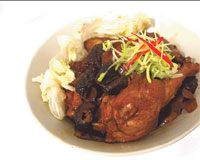 1. Trim head and tail off duck, as well as all visible fat. Chop into eight pieces. Combine minced ginger, sea salt and Chinese wine; and mix well. Pour over the duck pieces and set aside to marinate while you prepare the rest of ingredients.

3. Slit the sea cucumbers and scrape the insides with a sharp knife to thoroughly clean them. Rinse well and blanch them in boiling water with a few slices of the ginger and spring onions. Remove and drain well.

3. Heat up a little oil in a frying pan and add the garlic to brown. Add the rest of the sliced ginger and spring onions. Add the soaked mushrooms and stir-fry until fragrant.

4. Remove the mushrooms to a plate and turn up the heat. Add the duck and sear the pieces on all sides.

5. Add the sea cucumber, Chinese red dates, star anise and citrus peel and return the mushrooms to the pot. Toss to mix and then add enough hot water to cover the ingredients. Bring to a boil.

6. Add oyster and soy sauces, and immediately lower the heat to simmer until the duck is cooked and tender. If you like your sea cucumbers a little chewier, scoop them out after 10 minutes and return it to the pot just before the final boil. Adjust seasoning with salt.

7. Line a deep plate with lettuce leaves and arrange duck pieces on them. Pour the sea cucumber and all remaining juices over the duck and serve with a grinding of pepper.

I think the gravy is the best part of this dish and a bowl of rice drizzled with the rich brown juices is a satisfying treat. Instead of the dried shiitake or Chinese mushrooms, I added dried Yunnan porcini to my recipe, which made my kitchen bloom instantly with an amazing fragrance. The secret to this dish is to follow the recipe closely as it pays close attention to the various cooking times needed for the ingredients. You will be rewarded with a very tasty dish at the end, so rich and flavorful you may even forget there are sea cucumbers in it.

Choose a young lean duck, instead of a fatty bird, and trim off all visible fat around the neck and bottom to reduce the grease.

Previous：Seasonal delights to savor this autumn