The lonely lady in the moon

China is divided into as many culinary regions as there are different ethnic groups. Its geographical diversity and kaleidoscopic cultural profiles contribute to the unending banquet of flavors.

Mid-autumn is a time to celebrate good harvests after a yearlong cycle of sowing, weeding, watering and nurturing. To most in China, the brightest moon of the year also beams down on the whole family. It's a time for reunion.

There is also the beautiful Chang'e to add a tinge of romance to the festivities. While Westerners say there is an old man in the moon, and nursery rhymes say the moon is made of cheese, Chinese have spun the fairytale a little better.

On the occasion of midautumn, there are mooncakes and many other traditional snack foods to honor the festival. Above: A sliced pomelo. Photos Provided to China Daily

There are many versions of the legend, as always, but let's choose the prettier story to suit the occasion.

It was a very, very long time ago in the misty beginnings of history. Chang'e was the daughter of one of the earliest kings and was famous for her fairness of face. 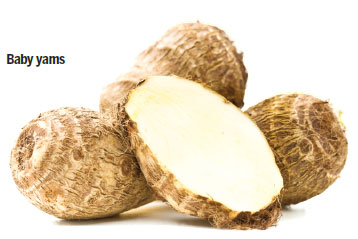 Like many beauties before her, she married a hero. Her husband, Hou Yi, was an accomplished archer whose most famous feat was shooting at 10 ravens masquerading as suns and scorching the Earth. Luckily, his wife reminded him just in time to leave one in the sky so the people would not be left in perpetual darkness.

For his heroic act, Hou Yi was invited to a heavenly banquet hosted by the Mother Goddess and given a pill of immortality. He happily brought it home and gave it to his wife for safekeeping.

One day, however, a jealous villain came to the house while he was away and threatened Chang'e. In her panic, she swallowed the pill so the villain could not get at it.

Soon after, she started floating. When Hou Yi came home, it was to see his wife levitating toward the moon. He was devastated and cried to the heavens for help. We assume he was mourning the loss of his wife, and not the pill she accidentally swallowed.

Unfortunately, there was no power great enough to undo the magic of the pill. 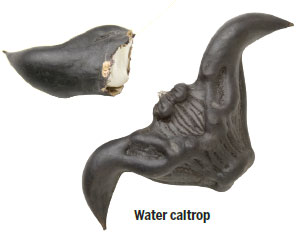 Chang'e was given a crystal palace to live in on the moon, and a pet rabbit for company. Hou Yi and Chang'e were allowed to meet once a year under the shade of the osmanthus tree by the palace when it flowered in mid-autumn.

So if you look carefully at the large full moon at mid-autumn, you can just make out the silhouettes of the beautiful Chang'e and her pet rabbit strolling just outside the crystal palace. Or, you may even spot Hou Yi on his annual visit.

On Earth, we honor the occasion with all sorts of delicious snacks on this night, some of them as round as the moon.

There are the mooncakes, of course. Dark brown lotus paste holds up a whole salted egg yolk, the whole covered by a shiny moist sweet oil-pastry. When the cake is cut in half, the yolk shines like the lunar orb.

While modern pastry chefs can go to town with all sorts of creative fillings, including fruits, custards, nuts and even chocolate, the traditional mooncakes using lotus and bean pastes and that glowing salted egg yolk still best reflect the legend.

Other seasonal foods are also eaten during this nocturnal picnic.

One of the most unusual is the water caltrop, an aquatic nut from the Suzhou-Zhejiang lake areas that matures during this time.

It is a dark brown nut that is almost black, with two horns on either side and what looks like a muscular torso in the middle. Perhaps the ancients included this tough nut in the celebrations to commemorate Chang'e's strongman husband, who sounds like he had more brawn than brain.

It is, however, very delicious and we crack open the steamed nuts with their hard shells to get at the snowy-white flesh within. You can also make attractive ornaments by drilling through the nut and attaching a small red Chinese knot to swing underneath it. Lacquered, the nut will stay a shiny black for a long time. 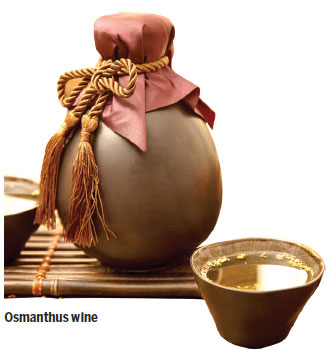 Baby yams are also eaten at this time. These yams, some no bigger than a large walnut, are steamed or boiled whole. Their slightly fuzzy skin is then peeled, and the purple yams dipped into raw sugar crystals or soy sauce.

My grandmother said they were just like Chang'e's little rabbit, and that always got the children cooing over them.

The Chinese have a large citrus fruit, the pomelo, that when cut open reveals a juicy interior that is exactly like a round, yellow moon. The fruit is sweetest in mid-autumn, and it's also one of the foods enjoyed now.

The serving of the pomelo is almost ceremonious. Four cuts are made through its tough, thick, pulpy skin and the sections carefully peeled away to expose the citrus fruit inside. The skin is kept whole so it can be hung up and dried.

The Cantonese, especially, create a wonderful stew with the dried peel later on.

The round segments of pulp are surrounded by a thick membrane that has to be cut or peeled away. Only then will the juicy pulp be exposed, sweet and tangy.

A gathering under the autumn moon will also have several servings of good tea to wash down the sweet mooncakes. Our family always drinks a semi-fermented oolong from Fujian, another reflection of the seasons. The green teas of summer are now too light and cool, and the dark, thick, rich-flavored tea so beloved in winter is still waiting its turn.

Sometimes, we toast the lady in the moon with some osmanthus wine, a good Shaoxing infused with the scent of flowers. This will be warmed up in its own hot-water bath so the fragrance of flower in the wine will waft in the cool night air.

In Beijing, the native walnuts and Chinese jujubes will also ripen at this time, and platters of nuts and fruits will add to the festivities.

Chang'e is a fairytale. In 1969, Apollo 11 and Neil Armstrong landed on the moon and earthlings got to see the barren cratered lunar landscape up close on television. My grandmother was devastated, and that year we were robbed of our mid-autumn feast.

My wise grandfather solved the problem by convincing her that Chang'e had very strong magic and, like the modest Chinese lady she was, she had not been prepared to meet the strange foreign visitors. Grandmother was only half-convinced but she was comforted enough that, the next year, our mooncakes came back.

Still, the moon is up, family and friends are gathered, and there is peace and goodwill. The mid-autumn moon is also the symbol of reunion and reconciliation, so here's wishing everyone a very merry festival with all your loved ones gathered close around you.